On 26th December 2019, three Australian Multiple Worldloppet Masters, Bruce Wharrie, Jim Finnie and myself, Marg Hayes flew out of Australia full of excitement each with the goal of completing another Worldloppet Master. Our intention was to ski 18 Worldloppet races in 10 different Worldloppet countrie,s a huge itinerary but very achievable or so we thought.

Our first destination was Changchun China for the China Vasaloppet. The China Vasaloppet race is in a forest park on the edge of the city. We stayed the first 6 nights in a cosy AirBnB apartment on the 12th floor building with views over the city and the final two nights at the Sheraton Hotel where the bus to the race departs from. We didn’t join the package tour offered when you enter the race, but made all our own bookings as it would be very difficult and dangerous getting straight off a plane from Australia’s Summer heat and trying to ski a marathon in sub-zero temperatures. Leaving Sydney’s 40 degrees, it was imperative to acclimatise to Changchun’s -23 degrees quickly, so we started with short skis in the city on a frozen river, then a frozen lake, then a city park as the race course isn’t open to skiers till the day before the race which makes it really difficult for skiers to become familiar with the race course or find anywhere with groomed trails to train on. Fortunately, by race day the temperature warmed up to -15 degrees so it was bearable.

The race was 2 x 25 kilometre loops of mostly man-made snow with a variety of skiing on forest trails and a frozen lake. The race is part of a Winter Festival with lots of winter events on the frozen lake including riding horses, snowmobiles, and other contraptions. The start area was transformed to contain over 50 snow carvings some as tall as a 4 storey building, 20 metres high and 100 metres long. Before the race started there was traditional dancing and singing. It was a lovely atmosphere. 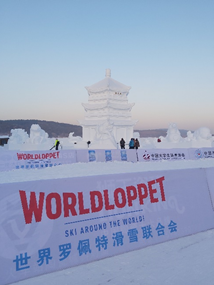 The hardest part of the China Vasaloppet race was the first few kilometres as many of the Chinese participants are over-enthusiastic young people with little ski experience but very fit so they are faster than us initially but in their rush to get past they ski recklessly on a narrow track. The first downhill was terrifying as many Chinese were skiing very fast, then crashing into other skiers. I was so glad to be past this section and settle into a rhythm. Most young Chinese were skiing the 25km race so the 2nd loop was absolute bliss with only experienced international skiers sprinkled around me and lots of peace and quiet.  Jim and I successfully skied the 50km race and Bruce easily completed the 25km event. It was a great feeling of satisfaction to complete as being the first race in our Worldloppet 2020 series, it was quite tough, especially for Jim who was recovering from breaking his collar bone in 4 places during the Aussie Winter which required surgery. There was more natural snow on the race course than 2 years previously and it had more glide.

We didn’t spend any time in Beijing this trip but flew directly to Vienna, Austria where two other Aussie skiers, Alan Levy and David Drohan joined us. Our group of 5 caught trains to Italy where we spent an enjoyable week skiing the impeccably groomed trails to stunning locations around Dobbiaco.

Next, just two hours train/bus north took us to Obertilliach Austria high in the Austrian Alps for Austria’s Worldloppet race, the Dolomitenlauf. Obertilliach is predominantly a farmers village with many traditional Austrian houses having the bottom storey for the cows and farm animals, and the families living on the second and third storeys. Some of the ski trails meander around fields, past many small barns mostly used during Spring/Summer for grazing purposes.  Other trails follow a narrow creek hidden from the sun all day long, with massive mushrooms of hoar frost and ice decorating the ground and trees. The creek trail was beautiful but very cold, certainly not a place to stop for a break. We skied the trails for a few days before the weekend of races. Travelling down to Lienz for bib-pickup was a bit tricky with the trains not working, buses instead, so we didn’t wait around in Lienz for the Worldloppet Masters reception.

Saturday was a 42km (gold) or 21km (silver) freestyle race which was either uphill or downhill involving 1 or 2 loops of a 21km course starting and finishing at the Biathlon centre at Obertilliach. Initially there were exciting downhills across open paddocks to reach the lower eastern end of the course, then the race-track followed the sparkling creek gently up and up on a narrow track where overtaking was difficult. Up, up on a quite steep climb which tested most skiers in the soft conditions. A few more hills then it was mostly down back to the Biathlon centre to start the second loop if skiing the long race. Classic skiers had good classic tracks available. Skiers were more spread out so it was easier to go your own pace on the second loop. 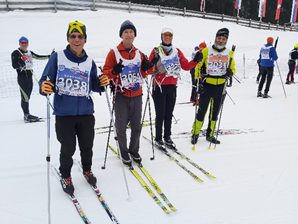 Sunday’s race 42km (gold) or 30km(silver) was classical technique and was held on a totally different course to celebrate the 50th anniversary of the Dolomitenlauf. The start was at Heinfors, half hour bus ride from Obertilliach and the race followed a river gently down, down, down to the town of Lienz. Both races started and finished at the same locations, however the longer race had lots of extra loops through farmer’s paddocks to make up the extra distance. Snow had been trucked in overnight so we skied through Lienz’s main shopping street finishing in the central town square. It certainly had a lot of atmosphere skiing through farmers’ fields, beside a river and then through the main street of Lienz.

Leaving Obertilliach we travelled by buses and trains to Italy’s Cavalese (population 4,500) which is perched high on the side of a hill with no nearby skiing (except on race day). One day we caught a bus 20 minutes to Passo Lavaze, a high mountain pass where the cross country trails were perfectly manicured with stunning 360 degree mountain views.  On the Thursday before the Marcialonga there was a 22km Silver Worldloppet race at Passo Lavaze which we all participated in. A huge thank-you to the race organisers who helped us with transport as the ski bus arrived too late. It was a very low key event (about 300 participants) but very enjoyable with gifts for all entrants -a hat, ski bag or bumbag, each gift probably worth more than the €35 race entry fee.  A couple of other days we caught buses further up the valleys to ski on some of the Marcialonga course. On the Friday there is a Worldloppet Masters reception where it was great to chat and meet Worldloppet skiers from different countries. 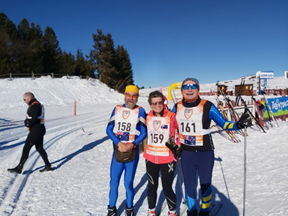 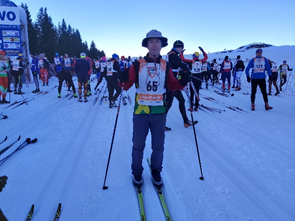 The Marcialonga race is huge, being 70kms long (gold) with 7,500 competitors and a further 1,500 competitors in the “shorter” 45km (silver) simultaneous race.  It’s a real tour through the Italian countryside of two valleys, Val de Fiemme and Val de Fassa as well as passing right through the main street of many tiny villages with the gap between buildings in a few places being only 2 metres.  Temperatures on Sunday morning were unusually warm being around zero-1 degrees.  It was great to be so warm but the problem was the classic tracks totally fell apart. The only skiers who had decent tracks were the elite and first few hundred people. By the time I was skiing (start number 4,287 start group 9 out of 14) the tracks were non-existent or very fat making for juddering, shaking legs. The terrible conditions made for slower treacherous skiing conditions. Each slide forward included a random, icy slip sideways.  The first 20kms of the course follows a river valley upstream with lots of short ups and downs. The track is quite narrow only 3 skiers wide.  Congestion was a problem on steeper ups and downs with queues of skiers usually patiently taking their turn.  At Canazei (20km) the race course crosses the creek and the downhill 30km begins; it’s mostly gentle, good for double poling, though the lack of tracks made the going tricky and the usually challenging descents icier and even more difficult. 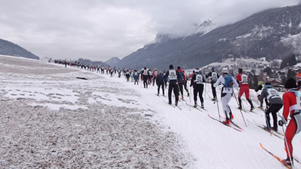 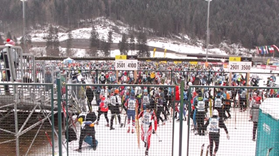 Every 8-10km there was a drink and food station which was very welcome.  At Pozza De Fassa (30km), the rest stop was a giant indoor tent that you skied through.  After 45km the 1,500 short race skiers finished their event but the rest of us continued on, thankfully the terrain was a little easier for 20kms.  The drink stations became more frequent, every few kilometres, as every tiny village hosted their own refreshments to cheer on the skiers. After 67kms I reached the final drink station at the bottom of the big hill. Dave told me later he had 5 coffees (macchiato, tiny cups of strong black Italian coffee) at this stop.  The final hill is a steep grind as you leave the river valley and climb 2.5km up the side of the hill in sloppy and unconsolidated snow between houses to Cavalese.  It’s up and up but there was heaps of spectators cheering me on and lots of other competitors around me.  Finally I skied into Cavalese between the 3 storey buildings on what’s usually a 1 lane cobblestone road and the final turn into the finish. There were thousands of spectators lining the street; a really party atmosphere. After 6 hours and 32 minutes of continuous skiing I crossed the finish line and was able to celebrate completing the Maricalonga. It was such a great feeling as conditions were so challenging that some 2,400 skiers out of 7,500 skiers didn’t make the rigid cut-off times so were not permitted to continue on to the finish line. When the last skier crossed the finish line they are crowned with a large wreath just like the winner and the valley erupts with the noise of a massive fireworks display across the night sky, signalling the Marcialonga is over for another year.  A beautiful touch!

Unfortunately, the Konig Ludwig Lauf was cancelled due to insufficient snow. As we had accommodation bookings that we couldn’t cancel without losing all our money and we had already booked non-refundable train tickets from Oberammergau to Czech Republic, we made the decision to still go to Oberammergau intent on making the most of the situation.

Travelling by train and bus to Oberammergau from Seefeld, we noticed that there was lots of snow and beautifully groomed xc trails at Garmisch, a mere 30 minutes from Oberammergau and felt that the Konig Ludwig Lauf race organisers need to think laterally and have a back-up plan if there is insufficient snow to conduct the race on it’s usual venue, then an alternative venue like Garmisch should be used.

Arriving in Oberammergau, there was snow everywhere from the recent weather event however by the next morning with the warm temperatures it was melting fast. We went for a ski on the Friday but the snow was literally disappearing under our skis.  We had an enjoyable 20km ski in rain then sunshine, but conditions were unsuitable for a race with hundreds of entered skiers though maybe shorter circuits could have been utilised if only for the intercontinental skiers who had travelled so far to participate in this event.  For 2 of our Aussie friends this would have been their 10th Worldloppet race enabling them to become Worldloppet Masters however each returned to Australia short 1 race, meaning they will need to travel overseas again to earn their Masters. Instead of ski racing, we spent the days exploring the local area which was interesting but not what we had come for.

This entry was posted in Race reports 2020. Bookmark the permalink.